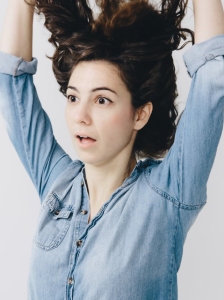 Kirsten Lepore is an LA-based director and animator, and alumna of CalArts. She recently wrote and directed an Emmy-winning stop-motion episode for Cartoon Network’s hit show, Adventure Time. Her films have taken top prizes at SXSW, Slamdance, Stuttgart Animation festival, Florida Film Fest, Arizona Film Fest, Vimeo Awards, the Annie Awards and many others. She’s given talks everywhere from Pixar to Portugal and has also been featured in Juxtapoz, Shots Magazine, Animation Magazine, and named one of the 50 most creative people by Creativity Magazine.

With a client list including Google, MTV, Facebook, Nickelodeon, Yo Gabba Gabba, Whole Foods, Toyota, and more, her work has been featured on TV, the web, in museums, and at 100+ international film festivals. Visit her web: http://www.kirstenlepore.com/

Niki Lindroth von Bahr is an artist and animation director based in Stockholm, Sweden. Her films Bath House (2014) and Tord & Tord (2010) has been screened at festivals around the world, such as big festival like Berlinale, Sundance and Annecy. Tord & Tord were also nominated as Best Short film at Guldbaggegalan (Main Swedish film award) 2011 and won the Grand Prix of Fredrikstad Animation Festival the same year. Niki got her master degree in fine art at the Royal Institute of Art in Stockholm, spring 2016. Along with making her own films, she is freelancing as a prop-maker and costume designer for film, theatre and commissioned films. In 2015, Niki and her collegue Nicklas Nilsson designed all of the costumes for David Bowies music video Blackstar.

Niki just released her new shortfilm, the animated musical The Burden. The film had its world premiere at Göteborg Int’ Film Festival 2017, where it was given the Shortfilm Grand Award as well as the Audience Award. All her work here: http://www.nikilindroth.com/

After several personal works, created with her partner Raúl Eguía, María Moreira went on to work for the big names in the Valencian stop-motion animation, such as Pablo Llorens and Javier Tostado, and then to take the international leap in being hired as Animator for Aardman Animations, where she has given life to such emblematic characters as Shaun the sheep, Morph, or Wallace & Gromit. She is currently in the final stretch of the new feature film directed by the Oscar-nominated Nick Park, Early Man. You can see part of her work here: https://vimeo.com/eguiastudio

Carolina López has a degree in Fine Arts from the University of Barcelona and in Animation Film from the West Surrey College of Art and Design in Farnham, England. She is the current director of Xcèntric, the cinema at the Centre de Cultura Contemporània de Barcelona, and Animac Lleida, the International Animated Film Festival of Catalonia. She curated Metamorphosis, fantastic visions of Starewitch, Švankmajer and the Brothers Quay, an exhibition co-produced by the CCCB (Barcelona 2014) and La Casa Encendida (Madrid 2014-2015) about the oeuvre of these four animators and their references in art and literature, with over 500 original works and 35 screens. She also devised and programmed From Doodles to Pixels: over 100 years of Spanish animation, a project that documents and recoups historic and independent films of all time. The resulting film programme was first shown at the International Animated Film Festival in Annecy and will be travelling to museums and film theatres around the world until 2018. She has been a regular programmer for the Sitges Festival, ArtFutura and Little Histories of Cinema (MACBA), and film cycles for festivals, museums and arts centres. She has made her own audiovisuals and commissioned works in the USA (where she worked for MTV), England, Italy (RAI), Iceland and Spain (Canal Plus, TVE, and Tesauro films).